The most famous Vogue magazine covers 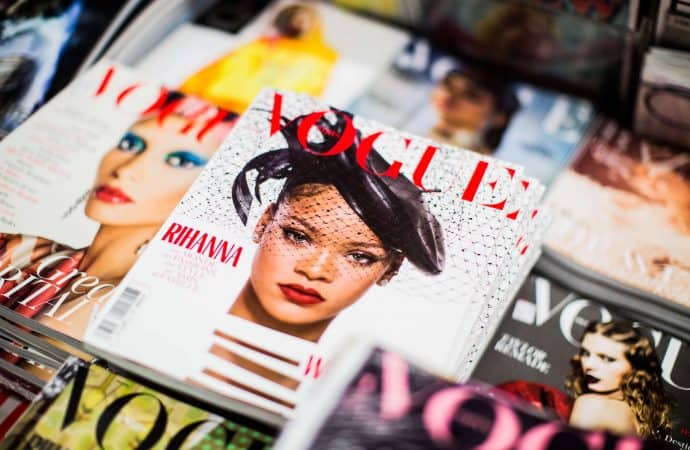 The covers the whole world was talking about. Do you remember them all?

Vogue has been published for nearly 130 years and is still considered the most important women’s magazine. Its covers have not once caused a storm and revolutionized the approach to controversial topics.

The history of Vogue began in the late 19th century in the United States. Since the birth of the magazine to the present day, the magazine has experienced several editors-in-chief, changes in frequency of publication. One thing has remained the same: a bold and revolutionary approach to many topics generally considered controversial.

Today, Vogue is published as a monthly. Apart from the American edition, 24 national editions are also released. Among them is Vogue Poland, the first copy of which was published in February 2018.

Lady Gaga and her naked truth

One of the more controversial covers of the local Vogue – Japan edition from March 2011 – featured singer and actress Lady Gaga wearing an outfit made of meat. Earlier, a similar dress Gaga wore to the 2010 MTV VMAs, her outfit meant to be a manifestation against the non-enlistment of gay and bisexual people. Lady Gaga wanted to manifest that as humans we are all the same and have the right to freedom.

Senior women for the cover

Vogue is a magazine which covers not only beautiful and young models. Senior women are also becoming the faces of the magazine. Among the most famous covers of this type can be mentioned British Vogue from June 2020. The face of the issue was 85-year-old phenomenal actress Judi Dench.

Also in British Vogue, Jane Fonda had a cover shoot. The beautiful senior in collaboration with L’Oreal Paris proved that the age from the ID card does not matter.

A cover that was ahead of its time and was an undisputed revolution in the way African-American beauty was presented. Vogue Italia, in July 2008, presented a cover titled Black Issue. The entire issue of the magazine featured only black models. It was a bold manifestation by the editor-in-chief of Italian Vogue Franca Sozzani to draw attention to the problem of discrimination against dark-skinned models. But not only that. Sozzani drew attention to the problem of unrealistic representation of bodies in mass media.

Another contemporary and controversial topic that Vogue addressed on one of its covers was body-positivity. The October cover of last year’s Vogue featured singer Lizzo. The artist made a bold statement about the harm of the Body Positive movement, which many are simply looking to cash in on. According to Lizzo, “Being fat is normal,” and that’s how overweight people should feel. The most important thing is to accept your body and treat it with the respect it deserves.

Sometimes the British editions of Vogue refer to events in the life of the royal family. One such memorable cover was the one from August 1981 with the face of Lady Diana Spencer. The then 20-year-old future duchess was immortalized in the photo by Lord Snowdon. Lady D is wearing very rich jewelry, which draws as much attention as the future duchess’s beauty and her iconic hairstyle.

The 100th anniversary cover of the magazine features Duchess Kate. The significant subtitle, “Celebrating the faces and fashions of a century,” and Kate’s face as a symbol, clearly identified the future queen as a personality and style marker of our time.

Pandemic for the cover

The COVID-19 pandemic also did not go unnoticed on Vogue covers around the world. Many models were photographed wearing masks characteristic of our times. Most likely, also these issues will go down in history as a sign of the fight against the disease.

The first cover of the Polish edition of Vogue magazine also stirred up a lot of controversy. It presented two world-famous Polish models: Małgosia Bela and Anja Rubik, against the background of the Palace of Culture and Science shrouded in fog, with a black Volga in the background. Simple, but very meaningful image. Opinions about the cover were very extreme. From admiration to misunderstanding the convention and hejt. Ultimately, the cover received a lot of recognition: despite the gray color scheme and relatively little exposure of models. Read more about Polish Vogue’s first cover and recent editorial changes here.